SAY IT AGAIN: THE H-1B DOES NOT TAKE AWAY US WORKER'S JOBS

I run a version of this post every few years.  Here is the 2015 version.  The Economist liked the chart in that version of the post, replicating it here.   The data leads to the unimpeachable conclusion that the H-1B visa does not take away US workers jobs.  The H-1B visa fills jobs in industries where it is nearly impossible to find qualified US workers. 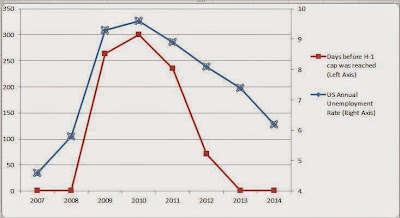 The lack of H-1B petition filings in years when the unemployment rate is high is compelling evidence against the argument that internationally-trained workers are being used to displace American workers and lower US workers' salaries.

Why?  Because if H-1B visa labor was being used primarily to lower US workers’ salaries, then H-1B filing numbers would not correlate with US unemployment rates.  If anything, the reverse would happen because the incentive to reduce workers’ salaries is likely greater in a recessed economy, not less.

The President and his hackneyed hatchet man Steven Miller do not believe in data.  The President recently signed a ridiculous Executive Order limiting permanent residency visas (green cards) for 60 days.  The Order accomplishes nothing, but may set the table for a broader visa ban, which could include H-1Bs and other temporary visas.

Miller is plainly not interested in the American economy.  He gave away his real interest when he said that the temporary ban would limit "chains of follow-on migration."  That is Miller’s real interest: stopping all forms of legal migration, which he believes waters down American culture.  His goal is to centrally plan American culture in his image.

Politicians should see employment visas for what they are -- tools for growing industries to fill labor shortages.  Organizations -- and governments -- work better when they work on data and not on nonsense and rhetoric.

Here is an updated version of the chart.  The most important part of the data looks at the spike in unemployment from 2008-2014.  It is worth nothing that since 2014 we have had record levels of H-1B petitions, and full employment. 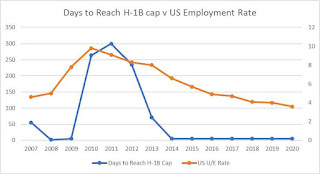 Posted by Rita Montgomery at 7:44 AM