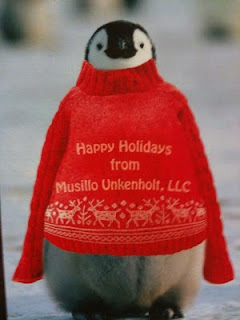 MU wishes all of its clients and friends a joyous season and a healthy New Year.

The only potential immigration bill that will come out of the American Congress this Lame Duck Session is the Dream Act. The Dream Act proposes to provide a “path” to legalization for illegal/undocumented immigrants who: (1) entered the US as minors (under 16), (2) have completed high school and either served in the US military for two years or completed at least two years of college, and (3) are of good moral character (e.g. no criminal convictions). The bill will only apply to those that have been in the US for five years or more on the day of enactment, so there is no risk of encouraging future illegal entrants. The bill has gone through a few different iterations, but these are the basic concepts.

The “path” is not an easy one. The House’s version of the Dream Act, which was passed earlier this month, says that applicants must spend a minimum of 11 years after becoming legalized, before they would eligible to even apply for US citizenship. In other words, if the Dream Act was passed tomorrow, the first applicants would not become US citizens until 2021. During that time period, applicants would have another batch of requirements, notably a continued “good moral character” requirement.

The Senate bill is shortly supposed to come up for vote. The Senate vote will be a close one. Outgoing Senate Majority Leader Harry Reid is said to be spending loads of time working his colleagues for votes.

While the bill doesn’t contain any provisions for healthcare workers, MU supports the bill and thinks you should too. For one, the bill appears to strike a proper balance the real-world concern of rewarding illegal entrants with the moral issues of penalizing children who have spent most of their lives in the US.

For two, it has been ages since Congress has passed a sensible immigration bill. By passing a moderate and moral bill, the US public may again see immigrants as people like them who help build a wonderful and enriched society. In turn, the healthcare community may get the immigration legislation it needs.
Posted by MU Law at 10:30 AM 3 comments:

The Department of State has just released the January 2011 Visa Bulletin, which is the fourth Visa Bulletin for US Fiscal Year 2011. This Visa Bulletin had small progress in several classifications.

The Philippine Overseas Employment Agency December 7, 2010 News Advisory cautions that “Medical students, graduates, and practitioners seem to be the favorite targets of employment scammers.” The POEA is the Philippine government’s regulatory agency for exiting Philippine nationals.

The News Advisory cites fraudulent employers posing to be healthcare facilities in Israel, Guam, and Switzerland, and says that the American Federal Bureau of Investigation is examining an alleged fake hospital in Guam.
Posted by MU Law at 12:23 PM 2 comments:

As of November 26, 2010, approximately 50,400 H-1B cap-subject petitions were receipted. Additionally, USCIS has receipted 18,400 H-1B petitions for aliens with advanced degrees. There are 65,000 “regular” cap-subject visas and 20,000 “advanced degree” H-1Bs”.
Historically, as the H-1B usage number has gotten closer to 65,000, the number of filings increases. Accordingly, MU urges all MU to prepare that the H-1B cap will be reached in January 2010, and may even be reached by year’s end.
The H-1B is the common employment-based nonimmigrant visa. The H-1B is a common visa for healthcare professionals such as Physical Therapists, Occupational Therapists, Speech Language Pathologists, some nursing positions, and other professions ordinarily associated with a Bachelors degree or greater. The H-1B traditionally has been in great demand by the IT community.
Generally speaking “new” H-1B petitions are subject to the H-1B cap. Employees that may need an H-1B visa include:
- International students working on an EAD card under an OPT or CPT program after having attended a U.S. school;
- International employees working on a TN may need an H-1B filed for them in order for them to pursue a permanent residency (green card) case;
- Prospective international employees in another visa status e.g. H-4, L-2, J-1, F-1;- H-1B workers with a cap exempt organization; and
- Prospective international employees currently living abroad.
International workers who are working here in the U.S. on an H-1B visa with another cap-subject employer are not subject to H-1B cap. These cases are commonly referred to as “transfer” cases and may be filed at any time throughout the year.
Posted by MU Law at 9:36 AM No comments: