Green Cards (also known as Permanent Resident Cards) do not always include the Permanent Resident’s signature on the face of the card.  Beginning in February 2015, the USCIS began waiving the signature requirement for individuals who filed for their Green Card from abroad through the Embassy or Consulate in the home country.   The USCIS may waive the signature requirement in other limited circumstances, such as for children under the age of 18 or individuals physically unable to provide a signature.

When the Green Card is issued without a signature, the card will say “Signature Waived” on the front and back of the card where a signature would normally be located. 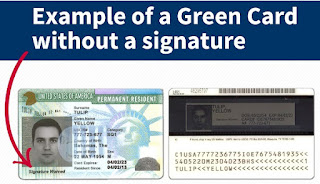 Green Cards identify the holder as a Lawful Permanent Resident of the United States and are proof of identity and work authorization.  Green Cards which say “signature waived” are valid for I-9 purposes, as long as the Green Card is unexpired.
Posted by MU Law at 3:14 PM 50 comments:

The USCIS has again revised its interpretation of the opinion that it issued in the controversial Simeio Solutions decision.  The revised Final Guidance says that the Simeio Solutions decision will not be applied retroactively, which is a significant change from the USCIS’ May 26, 2015 Guidance.  The revised Final Guidance now says that these actions must be taken:

DOS: EB-3s MAY MOVE AHEAD “A FEW MONTHS” IN SEPTEMBER

AILA’s “Check In with Charlie” is a monthly discussion with the Department of State’s officer who sets the monthly Visa Bulletin.  This month’s Check In revealed that Charlie thinks that EB-3 China, EB-3 India and EB-3 Philippines all have the potential to move forward a few months in September.  Whether or not the dates move will depend on demand for EB-3 Worldwide through early August.

Charlie also predicts EB-3 Worldwide and EB-3 Mexico will continue to advance in September.  He expects that these categories dates may hold steady starting in October for a month or two.  This will allow the DOS to see if greater demand from the recent advancement of the cut-off date results in these categories.

India and China EB-2 is expected to remain unchanged for the next month.
Posted by MU Law at 4:17 PM 1 comment:

Rumors persisted that the USCIS might end the suspension earlier than the previously announced July 27 reenactment date.  USCIS closely monitored the demand for the H-4 EADs and are confident that the implementation of the H-4 EAD program has worked well.  Accordingly, the suspension of the H-1B extension premium processing program is over.
Posted by MU Law at 11:51 AM No comments:

The Department of State has just released the August 2015 Visa Bulletin. This is the eleventh Visa Bulletin of the 2015 Fiscal Year.

The bizarre retrogression of the Philippines EB-3 continues.  Although the July Visa Bulletin showed that Philippine EB-3 was unavailable, this month shows a date: June 1, 2004.  This means that there are a few available visas for this fiscal year.  Please read our blog post from May 19 for deeper analysis on the state of the Philippine EB-3.

All Other EB-3 is essentially current, with a date of July 15, 2015.  This is great news for all EB-3s, other than Philippine, China, and India.

China EB-2 improved another two and a half months to December 15, 2013 and EB-3 remained at September 1, 2011.  The story was much different for China EB-3, which retrogressed back to 2004.  Just a few months ago, China EB-3 had actually progressed further than EB-2.  There is now a nearly ten year gap between these two categories.

D. CHINA-MAINLAND BORN EMPLOYMENT THIRD, AND THIRD OTHER WORKER VISA AVAILABILITY There was an extremely large increase in applicant demand reported for consideration in the determination of the August cut-off dates. Therefore, it has been necessary to retrogress the Employment Third, and Third Other Worker cut-off dates to hold number use within the FY-2015 annual limit. Every effort will be made to return those categories to the previously announced July cut-off dates as quickly as possible under the FY-2016 annual limits. Those limits will take effect October 1, 2015.
Posted by MU Law at 2:46 PM No comments:

The healthcare staffing and IT staffing industries have seen a large uptick in H-1B amendments being generated as a result of the USCIS foolish Simeio Solutions decision.  One issue that has come as a surprise to many clients is that an H-1B amendment is essentially no less work than a new H-1B cap-subject or H-1B extension petition.

USCIS policy on deference to prior petitions is explained in a 2004 USCIS Memorandum by William Yates.  Technically, USCIS officers are supposed to give deference in extension petitions unless,

(1) it is determined that there was a material error with regard to the previous petition approval; (2) a substantial change in circumstances has taken place; or (3) there is new material information that adversely impacts the petitioner’s or beneficiary’s eligibility.  Material error, changed circumstances, or new material information must be clearly articulated in the resulting request for evidence or decision denying the benefit sought, as appropriate.
(April 23, 2004, Yates Memorandum)

The problem is that this section is made toothless by the next paragraph:
[t]his memorandum does not in any way restrict or impact an adjudicator’s ability to deny, in the exercise of his or her discretion, the beneficiary’s simultaneous request to extend his or her stay in the United States in the same classification.

As a result, the USCIS only pays lip-service to deference in amendment and extension petitions.  The adjudicating officer will casually mention one of the three instances and then ask for entirely new information.  The officer will usually point to the sentence that the memorandum is not “in any way” meant to restrict the adjudicator’s ability to deny a case.

Essentially all H-1B legal points must be re-raised by the employer and will ultimately be re-adjudicated by the USCIS.
Posted by MU Law at 4:36 PM No comments: