OCTOBER 2020 VISA BULLETIN: EB-3 CURRENT FOR ALL BUT CHINA, INDIA

Table A: Final Action Dates -- Applications with these dates may be approved for their Green Card (Permanent Residency card) or Immigrant Visa appointment.

Table B: Dates of Filing

The USCIS has just announced that it will allow the more favorable Date of Filing chart for I-485 Adjustment of Status. This means that all employment based immigrants in EB-1, EB-2 or EB-3 can file their I-485s starting October 1, 2020.  However if they are natives of India or China, their priority date must be earlier than these dates: 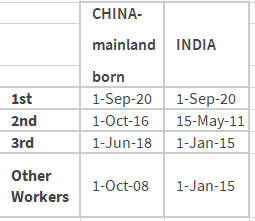 This was the Visa Bulletin that we have been expecting for some time.  Because of the State Department’s inability to issues immigrant visas for much of 2020, there are many, many immigrant visas that are now part of allocation for the new fiscal year.

Both the Philippines and Worldwide (All Other) EB-3 have become current.  We expect these categories to stay current for the foreseeable future.  The only constraint to the Philippine EB-3 visas being issued is the capacity at the Embassy in Manila.

221g CRISIS IN MANILA APPEARS TO HAVE ENDED

Thanks to aggressive lobbying and advocacy by the AAIHR, MU Law believes that immigrant visas are again being issued to applicants who apply through the US Embassy in Manila.  This week, a notable number of MU Law clients have been granted their visas.

Previously, the US Embassy in Manila had denied virtually every nurse immigrant visa for the entirety of 2020, including in January and February, before the pandemic began.

The HWRA is an important piece of proposed legislation that would allow US patients access to badly needed nurses and doctors.  These two occupations are severely undersupplied by US workers.  As the COVID pandemic moves into a phase where administration of a vaccine, the need for nurses will exponentially grow.

The HWRA provides a partial answer to this.  The HWRA allows 25,000 fully qualified nurses into the US, who are only waiting to enter the US because of bureaucratic delays and misallocated visa quotas.  The bill similarly allows doctors who have been waiting in the immigration queue for 10+ years to rise to the top of the queue.

And the HWRA does all this without adding a single visa to the annual quotas.  The HWRA recaptures visas that were authorized by Congress but were not issued because of processing delays at government agencies.

With 36 bipartisan Senators (out of 100) who have already signed on to co-sponsor the bill, the HWRA is among the most popular bills in the Senate.  In the House of Representatives, the co-sponsor list is approaching 70 members.  As with the Senate, the House list is fully bipartisan with a nearly 50/50 split between Democrats and Republicans.

Congress is now back in session, after taking most of August off.  It is expected that the Congress will take up additional COVID relief legislation.  The Democrat-controlled House passed a partisan bill in May, which the Republican-controlled Senate has declined to consider.  Now, the Republican-controlled Senate is expected to do the same, and attempt to pass a “skinny” COVID relief bill.  That bill is also not expected to go anywhere.

After that it is expected that Democrat and Republican leadership will attempt to broker a deal that both parties can hold their nose and agree to endorse.  Any agreement would have to come in the next few weeks.  HWRA advocates are actively seeking to make the HWRA part of any deal.

The first US presidential debate is set for September 29.  While not a true deadline, September 29 almost serves as a soft deadline for the HWRA, at least until after the US election on November 3.  If no deal is reached by September 29, there is a chance that Congress returns after the election and revisits a COVID relief deal.

Posted by Rita Montgomery at 8:58 AM 8 comments: