THE BLOG IS TWELVE YEARS OLD

I'm taking a brief time-out from the usual updates on healthcare immigration to note that this blog is now twelve years old!   The first blog post was on March 27, 2006 when I was with Hammond Law Group.  At that time, very few immigration law blogs existed.  The idea of a blog with such a narrow focus seemed a little naive, but thanks to a regular readership the blog has thrived.

In November 2007 Sam at ILW.com asked if I would like to syndicate my blog through ILW.com, which I immediately agreed to do. Readership doubled.    ILW.com has been a leader in immigration law information and a great supporter.  ILW.com now houses about a dozen blogs.  This one was the second, after Greg Siskind’s blog.

The blog’s main page at Musillo.com regularly attracts 15,000 monthly page views, sometimes doubling or tripling that number.  The current iteration of the blog (since 2009) passed one million page views earlier this month!

The best part about the blog has been the people that have connected with me through the blog.  I've been in Senate staff meetings and had their senior staff tell me that were regular readers.  AILA's Annual Conference is always a fun time because there are always a few attendees who read my name tag and tell me that they are regular readers.  Readers are always commenting. They are the blog's lifeblood.

Thanks to all of you for your kind words and input.

The blog is accessible through a number of channels.  I hope that you will keep reading and commenting. 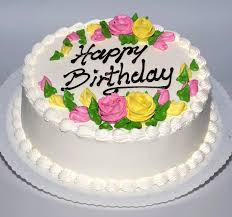 USCIS will temporarily suspend premium processing for all FY 2019 cap-subject petitions, including petitions seeking an exemption for individuals with a U.S. master’s degree or higher. This suspension is expected to last until Sept. 10, 2018.

During this time, USCIS will continue to accept premium processing requests for H-1B petitions that are not subject to the FY 2019 cap.

USCIS’ press release says that this temporary suspension will help them reduce overall H-1B processing times in these ways:

-Process long-pending petitions, which we have currently been unable to process due to the high volume of incoming petitions and the significant surge in premium processing requests over the past few years; and
-Prioritize adjudication of H-1B extension of status cases that are nearing the 240 day mark.

Starting April 2, 2018, USCIS will begin accepting H-1B petitions subject to the Fiscal Year (FY) 2019 cap.  The H-1b cap is expected to be reached during the first week in April.

Table A: Final Action Dates -- Applications with these dates may be approved for their Green Card (Permanent Residency card) or Immigrant Visa appointment.


Table B: Dates for Filing -- The DOS may work on applications with these dates. But the Visa cannot be approved until the date is current per Table A.


MU Law Analysis (all references are to Table A unless noted)

All Other:  The EB-2 has been current for many years.  The EB-3 is also current and is expected to remain current for the foreseeable future.

China (mainland-born):  Both China EB-2 and EB-3 favorably progressed, each by more than 6 months in Table A.  The China EB-3 remains more favorable than Chinese EB-2.  The odd situation of China EB-3 progressing faster than China EB-2 will remain to be the case for the foreseeable future.  The Chinese EB-1 date retrogressed back to 2012.  We will have a blog post about this shortly.

India:  Although EB-2 barely moved, EB-3 leaped ahead one year!  This is terrific news for Indian EB-3 cases.  While we do not think that another one year movement is in the future, it would not surprise us if the progress holds because (a) the 2007 Visa Gate situation has now passed, and (b) the 2007-12 recession led to a smaller number of green card filings than would have otherwise been filed.  The India EB-1 date retrogressed back to 2012.  We will have a blog post about this shortly.

Mexico: Mirrors All Other in analysis.

Philippines: While our internal measures indicated last month that we should be optimistic that Phils EB-3 would continue to move forward, we did not expect just how positive the progression would be.  Phils EB-3 is now at Jan 2017, which is only a 14 month retrogression. Great news indeed!
Posted by MU Law at 2:03 PM 38 comments: 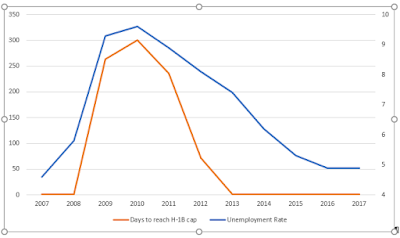 The lack of H-1B petition filings in years when the unemployment rate is high is compelling evidence against the argument that internationally-trained workers are being used to displace American workers and lower US workers' salaries.

Why?  Because if H-1B visa labor was being used primarily to lower US workers’ salaries, then H-1B filing numbers would not correlate with US unemployment rates.  If anything, the reverse would happen because the incentive to reduce workers’ salaries is likely greater in a recessed economy, not less.