ILW has a nice table of other immigration provisions that are included in the Act, such as H-2, Physicians, E-Verify, R-1, EB-5, and Visa Waivers.  Most of these are routine extensions of existing programs that had recently ended.

The Department of State has just issued the January 2016 Visa Bulletin.  This is the fourth Visa Bulletin of Fiscal Year 2016.

Applications with these dates may be approved for their Green Card (Permanent Residency card).

All: These dates continue to be very favorable.  We expect that All Other dates will continue to be positive for the foreseeable future.
China: EB-2 did not change. EB-3 has progressed six months Nov 2015 Visa Bulletin, which was 01JAN12.
India: EB-2 jumped again. Three months ago it was 01MAY05. In Nov 2015's Visa Bulletin it was 01AUG06.  In December 2015 it was 01JUN07.  This trend may continue. EB-3 moved two weeks.  Our sense is that EB3 will only move by weeks in the forthcoming months.
Mexico: Mirrors All Other in all aspects.
Philippines: EB-3 moved ahead four months. MU Law believes that Philippines EB-3 will steadily move forward in the coming months.

Applications with these priority dates may file their I-485 Adjustment of Status, provided that the USCIS issues its monthly authorization.

The Dates of Filing chart did not materially change from October or November 2015. This is not a surprise. The USCIS and Department of State have been sued in response to the September 2015 revised Visa Bulletin.

H-1B employers are reminded of the USCIS’ revised Final Guidance in the Simeio Solutions decision. Although the decision was not to be applied retroactively, H-1B amendments still must be filed in certain instances:

AMN Healthcare, one of the largest healthcare staffing companies in the US, has recently issued a survey that shows that almost two out of every three baby boomer nurses are contemplating recruitment.  A summary of the survey is on the Staffing Industry Analyst’s webpage.
The main take-away:

Of those nurses over 54 who are considering retirement, 62% plan to retire within the next three years. Additionally, 21% of nurses over age 54 said they will switch to part time work.

Paralleling this massive downturn in US healthcare workers is an expected boom in America’s demand for healthcare services.  The number of uninsured has dropped by millions since the passage of the Affordable Car Act (Obamacare).  Foreign labor must be part of this answer.  Unfortunately the current immigration scheme makes it very difficult to navigate a reasonable strategy.

Sen. Grassley believes that the H-1B visa is used to replace US workers.  He has long cited a 2008 USCIS Report as evidence of fraud in the H-1B program.  To date, exactly zero prosecutions have resulted from this flimsy report.

Sen. Grassley proposed bill sets forth a system where employers would have to register and re-register with various government agencies.  It would limit certain employers from hiring H-1B workers and increase enforcement.

Sen. Grassley’s bill will surely restrict H-1B workers.  It is not clear that it will help US workers.  Any credible study points out that the H-1B usage mirrors the US employment rate.  The Economist has picked up on this finding.  A better approach is to ask why US workers no longer move for better opportunities, since most H-1B employer’s value H-1B workers geographical flexibility. 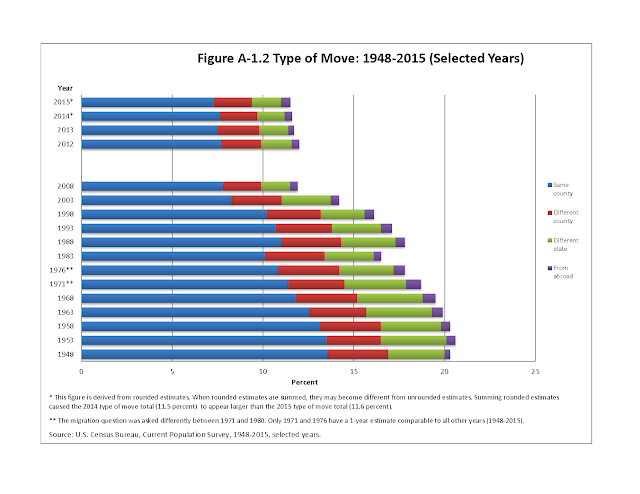 Source: https://www.census.gov/hhes/migration/data/cps/historical/Figure%20A-1.2.png
Posted by MU Law at 11:30 AM No comments:

ANALYSIS OF THE DECEMBER 2015 VISA BULLETIN

MU Law Analysis
All: No change from Nov 2015 Visa Bulletin, other than a one month improvement in EB-3.
China: EB-2 did not change. EB-3 progressed a few months from Nov 2015 Visa Bulletin, which was 01JAN12.
India: EB-2 jumped again. Two months ago it was 01MAY05. In Nov 2015's Visa Bulletin it was 01AUG06. This trend may continue. EB-3 continued its steady but slow progress.
Mexico: One month gain in EB-3.
Philippines: EB-3 moved ahead six weeks. MU Law believes that Philippines EB-3 will steadily move forward in the coming months.

The Dates of Filing chart did not change from October or November 2015. This is not a surprise. The USCIS and Department of State have been sued in response to the September 2015 revised Visa Bulletin.
Our analysis is the same as our explain in our October 10, 2015 blog post.
Posted by MU Law at 2:58 PM 35 comments:

USCIS E-FILING: HOW TO WASTE A BILLION DOLLARS

Today’s Washington Post outlines the USCIS’ attempts to move out of the paper age and into the electronic age.  After 10 years and a $1 billion, the USCIS has one form on-line, the I-90, which is used to renew a Green Card.  For those unfamiliar with the Form I-90, it is comparable to a driver’s license renewal form.  Ninety-nine other forms remain only available via paper filing.

The project was originally supposed to be completed by 2013 at a budget of a half-billion dollars.  The USCIS now expects the program to be on-line in 2019 at a cost of $3.1 billion, although if history is any guide it will be years beyond that at a even greater costs.

Part of the problem is the “gotcha” nature of the forms themselves, which is indicative of a tone-deaf USCIS.  The forms often ask irrelevant and unnecessary questions, aimed presumably at tripping up users.

Instead of focusing on the e-filing initiative, the USCIS chooses to waste time and resources.  For instance, the Simeio Solutions decision in April adds tens of thousands of petitions to the USCIS without any legal necessity.  The entire goal of the decision seems to be to make life difficult for H-1B workers who switch job locations.  There is no evidence that any legitimate policy goal was achieved by the decision.  If anything the decision and the later multiple USCIS Memos that attempted to clarify the decision,  are contrary to President Obama’s attempts to modernize US immigration policy and align it with the real world.

Until these stakeholders are regularly engaged, skeptics will continue to criticize.  Until the administration makes it a priority to hold USCIS officials accountable for aimless policy and bloated budgets, the USCIS will continue its bumbling nature.
Posted by MU Law at 10:23 AM No comments:

This blog produced several articles on the series of events, which has been dubbed “Visa Gate” on Twitter.

Sept. 16 - MORE NEWS AND ANALYSIS ON THE NEW VISA BULLETIN

Oct 10 - IN DEPTH ANALYSIS OF THE NOVEMBER 2015 VISA BULLETIN

The House Member’s letter asks for the estimated number of applicants who were impacted by the last minute revised Visa Bulletin.

Going further, they ask for DHS to consider providing EAD cards and allowing portability to those with approved I-140s.  Both concepts were recently endorsed by AILA.
Posted by MU Law at 10:20 AM No comments:

HEALTHCARE STAFFING EXPECTED TO GROW BY 17% IN 2016

Reasons for the increase in staffing are many, including tightening US labor supply and Obamacare allowing previously uninsured patients to avail themselves of healthcare services.  More details on the report are accessible on their webpage.

The H-2B visa is a visa used for temporary or seasonal workers.  As BALCA explained in a case published earlier this week, In the matter of: Absolute Home Care, the H-2B is not a flexible visa.  The H-2B is not a viable option for healthcare employers seeking to fill long term staffing shortages.  An H-2B can only be used to fill staffing shortages, such as a one-time occurrence, seasonal need, peakload need or intermittent need.

This argument this did not convince the BALCA judge for at least two reasons.  First, the evidence was that the need was for three winter months, not the nine months requested in the Application.  Second, Absolute Home Care asked for 20 Caregivers without documenting a single client contract substantiating the need for the period between October 2015 – June 2016.

One bright spot is that the judge’s opinion allows the reader to “reverse engineer” how an H-2B might be approvable.  A successful case could be made if the employer can show past practice evinces a seasonal need, along with specific forward-looking contracts detailing a temporary need for the workers.
Posted by MU Law at 5:36 PM No comments:

USCIS TO PUBLISH ITS OWN VISA BULLETIN

USCIS expects that this chart will be published approximately one week after the publication of the Department of State’s Visa Bulletin.  The November 2015 is expected to be published shortly.

The Department of State’s Application Final Action Date (Chart A) chart will be used to determine when individuals may file their adjustment of status applications.
Posted by MU Law at 11:44 AM No comments:

IN DEPTH ANALYSIS OF THE NOVEMBER 2015 VISA BULLETIN

The Department of State has just issued the November 2015 Visa Bulletin.  The new revised Visa Bulletin had a devastating impact on those in the US and who qualify as China EB-2, India EB-2, and Philippines EB-3.   We have a detailed analysis of the Visa Bulletin at the end of this blog post.

The Department of State now publishes two Employment-based Visa Bulletin charts each month: (1) Final Action Dates (dates when visas may finally be issued); and (2) Dates for Filing Applications (earliest dates when applicants may be able to apply).

The earlier filing of the I-485 has several direct benefits for both employers and employees:

The Dates of Filing chart did not change from October 2015.  This is not a surprise.  The USCIS and Department of State have been sued in response to the September 2015 revised Visa Bulletin.

The Plaintiffs lost their bid for a Temporary Restraining Order.  If the Plaintiffs were successful, then the USCIS and DOS would have been forced by the judge to revert back to the original September 2015 Visa Bulletin.

The Dates of Filing chart will not change until one of three things happen.  First, the Plaintiffs could be successful in their lawsuit.  However the lawsuit will take many months.  Witnesses will have to be deposed and documents will have to be shared.  Our sense is that the earliest that the lawsuit could be complete is early 2016.

AILA has been working behind the scenes to lobby the agencies for an accurate Dates of Filing chart.  There is a sense among immigration attorneys, MU Law included, that the agencies do not really have a firm grasp of the volume of immigrant visa numbers.  Our evidence for this claim is the seemingly random dates listed on visa bulletins.  The pressure being exerted on the agencies may force the agencies to truly do their job and accurately project Visa Bulletin dates.

Thirdly, the numbers may compel movement. This third path may be the most realistic.