Every year our office transforms for a few days from Musillo Unkenholt to Boo-Sillo Unkenholt.  Check out our Facebook page to see more pictures of our Halloween-themed office. 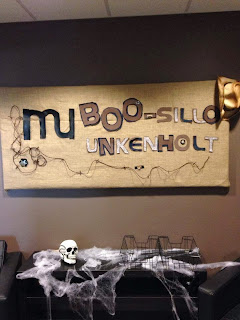 IS CIR ALIVE OR DEAD?

More moderate forces, such as Reps. Mario Diaz-Balart (R-FL), Paul Ryan (R-WI), and Eric Cantor (R-VA) think Comprehensive Immigration Reform may be the way for the Republicans  to stop the falling polling numbers.

The politics on this will be the key.  On one hand, this may be Maj. Leader John Boehner’s (R-OH) last chance to salvage his legacy.  On the other hand, a substantial rift has developed within the GOP ranks.  Tea Party members, whose unofficial leadership includes Sen. Ted Cruz (R-TX) and Sen. Mike Lee (R-UT), contend that the shutdown strategy was effective and likely will not seek to compromise on immigration reform.  One interesting development may be that while Sen. Cruz remains popular, Sen. Lee’s own ratings have plunged.  His fellow Utah Senator, Orrin Hatch (R-UT), has refused to endorse him for re-election.

The Democrats seem like they are ready to deal.  If Pres. Obama and the Democratic leadership can get a compromise on immigration it would cement two of Pres. Obama’s prime domestic policy aims.  The next few weeks will be important.  No pundits believe that a Comprehensive Immigration Reform bill that drags into 2014 has much of a chance at survival.

Late yesterday the Senate and House each passed a budget bill, which was signed by President Obama.  The bill’s signing ends the two week federal government shutdown.  The shutdown obstructed many immigration services, notably the Department of Labor’s iCert system, which was shuttered.  Through the iCert system employers and their lawyers apply for Labor Condition Applications (LCAs), Prevailing Wage Determination (PWDs) and Permanent Employment Labor certification (PERM).  The discontinuation of these programs meant that H-1Bs and PERM-based green card applications effectively stopped.

As of this writing, the iCert system remains inoperable.  It is expected that the iCert system will commence operating within 24 hours.  At that time MU Law immediately will begin filing LCAs, PWDs, and PERM applications.  We are prioritizing those matters with a legal deadline or business necessity.

Other immigration services were slowed by the shutdown.  It is expected that those services should return to normal processing times in the near future.
Posted by MU Law at 10:34 AM 2 comments:

I-9 TIPS FOR STAFFING COMPANIES

The US Immigration and Customs Enforcement (ICE) has recently announced an increase in Form I-9 enforcement.  Form I-9 completion and retention is often problematic for companies who place workers at third-party worksites because the Form I-9 documents must be seen in person by the employer or the employer’s representative.  The April 2013 update to the US government’s M-274, Handbook for Employers, reconfirmed the best practice for Form I-9 completion in these difficult situations.

In these instances, the best practice is for the employer to specially designate someone to personally review the documents and complete Form I-9, Section 2, Employer or Authorized Representative Review and Verification.  Ideally this person should be a Notary Public, although the rule allows anyone acting on the employer’s behalf, such as another employee at the worksite.
Posted by MU Law at 11:13 AM 1 comment:

The Department of State has just released the November 2013 Visa Bulletin.  This is the second Visa Bulletin of the 2014 US Fiscal Year, which began on October 1, 2013.

The All Other Countries EB-3 date jumped about three months from July 2010 to October 1, 2010.  The Chinese EB-2 and EB-3 dates each progressed several months.

Unfortunately the Indian and Philippine EB-2 and EB-3 remained stuck exactly where they were for the October 2013 Visa Bulletin.

Here is the chart:

The issues described in this MU Visa Advisor are complex and very much driven by the facts of your case.  Please do not hesitate to contact MU Law if you have any questions about these issues.

The Federal Government Shutdown has caused the Department of Labor to furlough about 80% of its workforce.  As a result the DOL’s iCert System, which is the manner through which LCAs are filed, has been turned off.  It is impossible to file LCAs, leading to many questions from H-1B employers.

The Labor Condition Application (LCA) is the centerpiece of the H-1B program.  It serves two primary functions.  First, it forces the H-1B employer to certify that the wage that it is offering to pay the H-1B worker is not lower than similar US workers.  Second, the LCA includes a mandatory mechanism whereby H-1B employers must notify potential US workers of their right to contact the Department of Labor (DOL) if they believe that the H-1B employer is engaging in prohibited behavior.

There are two ways that the LCA is utilized in the H-1B process.  First, new H-1B petitions must be submitted with an LCA that has been certified by the DOL.  Second, if an employee is going to change worksites, the employer must provide new Notice to the workers at this new worksite.  In some instance, the H-1B employer must file a new LCA with the DOL and wait the seven days for the DOL to certify the new LCA.  In other instances, the H-1B employer must not only obtain a new certified LCA but must also file a new H-1B.

Unfortunately with the government shutdown the DOL has shuttered the LCA system.  It is impossible to file LCAs.  The DOL has not given the public any guidance on how to handle new H-1B petitions nor how to handle new situations where a new LCA is required.

On account of the fact that LCAs cannot be filed, H-1B employees should not change worksites in instances where a new LCA would normally be required.  This is the safest approach.  Once the government shutdown ends, H-1B employers can file an LCA and the employee can move once the new LCA is certified and in place.

On the bright side there are some instances when a new LCA is not required.

If business needs demand that an H-1B must change worksites, then the H-1B employer must be aware that it may be technically violating law, although a legal argument could be made that compliance with the law was impossible on account of the shutdown.  Penalties can range from $1,000 - $35,000 per violation.  Debarment from the H-1B program could also occur.  After considering these potential penalties, an H-1B employer still feels compelled to move the H-1B worker, we urge that H-1B employers take all three of these additional measures to mitigate risk:

·         Make sure to post LCA posting.  Even though we would not be able to file an LCA, we would still be able to post Notice at the destination worksite.  We can prepare the Notice Posting for you.
·         File an LCA at the conclusion of the shutdown.

Lost amid the federal government shutdown was the fact that the new fiscal year began on October 1.  With that date thousands of H-1B workers began their H-1B status.

Those who obtained H-1B visas via overseas US Consulates and Embassies were eligible to enter the US, generally after September 20.  People in the US in other status -- e.g. F-1, Students; H-4, Derivative spouses -- had their nonimmigrant status change by operation of law on October 1.

H-1B employers are reminded to update their Form I-9s to reflect these employees new H-1B nonimmigrant status.  The USCIS increasingly is auditing companies I-9 files and issuing fines to the non-complaint. (Although one piece of good news from the shutdown: DOL investigations have been suspended.)
Posted by MU Law at 10:06 AM No comments:

Congress’ failure to establish a budget for Fiscal Year 2014 (start date, October 1, 2013) has an impact on some areas of immigration.  If you have any questions about how the government shutdown may impact your petitions, please contact Musillo Unkenholt.

United States Citizenship and Immigration Services:  USCIS operations continue despite the Federal Government shutdown, because fee-for-service activities performed by USCIS are not affected by a lapse in annual appropriated funding.  H-1B, L-1, I-140, and I-485 petitions and applications are expected to continue processing with little impact as a result of the federal government’s shutdown.
All USCIS offices worldwide are open for interviews and appointments as scheduled. E-Verify is an exception and is unavailable during the shutdown. For more information about how the shutdown is effecting E-Verify please visit www.dhs.gov/e-verify.
Department of Labor: Most DOL functions that impact immigration will stop working as a result of the federal shutdown.  The DOLwill neither accept nor process any applications or related materials (such as audit responses), it receives, including Labor Condition Applications, Applications for Prevailing Wage Determination, Applications for Temporary Employment Certification, or Applications for Permanent Employment Certification. The DOL’s web site, including the iCERT Visa Portal System and the PERM system, have become static and are unable to process any requests or allow authorized users to access their online accounts.

Department of State: The Department will continue as many normal operations as possible; operating status and available funding will need to be monitored continuously and closely, and planning for a lapse in appropriations must be continued. Visa issuance will be available in consulates that have adequate funding to continue operating.  Please contact our office to determine if the consulate you plan to attend will continue operating.

Customs and Border Patrol: Inspection and law enforcement are considered "essential personnel," though staffing may be more limited than usual.  The borders will be open, and CBP is unsure of how the shutdown will affect the processing of applications filed at the border at this time.

State Agencies:  State agencies, such as driver’s licenses and professional licenses (e.g. Registered Nurse, Physical and Occupational Therapy licenses), are not impacted by the federal shutdown.
Posted by MU Law at 4:04 PM No comments: